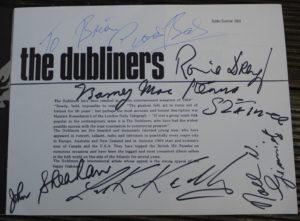 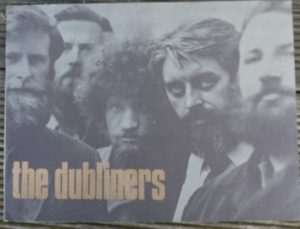 Imagine our amazement to find that some of Brian Lawton’s photographs have turned up in a second hand music shop in Guildford, Surrey! Apparently a collection of pre-1960 jazz-related material and folk materials from the same era and later were brought into the shop during 2016, possibly acquired from an earlier house clearance auction in Basingstoke.  The whole lot smelt of mothballs. Two people bought the collections, according to their respective interests.  Many of the items within the wide ranging folk-related collection were signed ‘To Brian with best wishes’ but who Brian was remained a mystery. Tucked among the materials that included a signed poster of Phil Ochs, programmes for concerts at Manchester’s Free Trade Hall was a scrap of paper with ‘Lawton’ written on it. An online search combining Brian and Lawton discovered the HLF Brian Lawton Legacy Project. Since then we receive scanned versions of the items generously donated to the project by Nick D.  We’ll never learn the whole story but it has unexpectedly helped to bring some of Brian Lawton’s photographs and memorabilia back together  – and widened interest in the project.